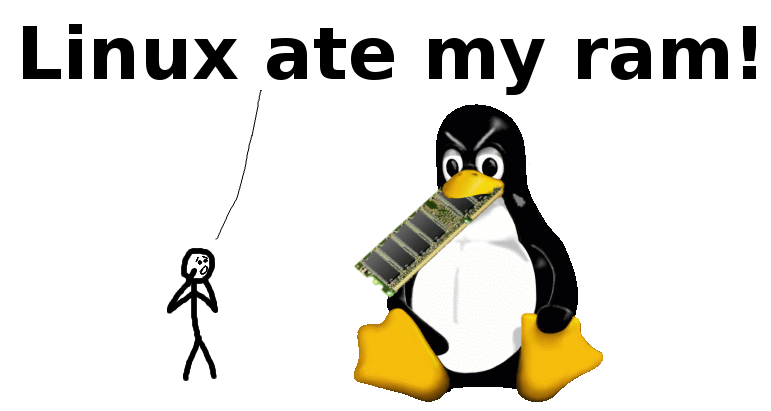 Don't Panic!
Your ram is fine!

Linux is borrowing unused memory for disk caching. This makes it look like you are low on memory, but you are not! Everything is fine!

Why is it doing this?

Disk caching makes the system much faster and more responsive! There are no downsides, except for confusing newbies. It does not take memory away from applications in any way, ever!

What if I want to run more applications?

If your applications want more memory, they just take back a chunk that the disk cache borrowed. Disk cache can always be given back to applications immediately! You are not low on ram!

Do I need more swap?

No, disk caching only borrows the ram that applications don't currently want. It will not use swap. If applications want more memory, they just take it back from the disk cache. They will not start swapping.

How do I stop Linux from doing this?

If, however, you find yourself needing to clear some RAM quickly to workaround another issue, like a VM misbehaving, you can force linux to nondestructively drop caches using echo 3 | sudo tee /proc/sys/vm/drop_caches.

Why does top and free say all my ram is used if it isn't?

This is just a difference in terminology. Both you and Linux agree that memory taken by applications is "used", while memory that isn't used for anything is "free".

But how do you count memory that is currently used for something, but can still be made available to applications?

You might count that memory as "free" and/or "available". Linux instead counts it as "used", but also "available":

This "something" is (roughly) what top and free calls "buffers" and "cached". Since your and Linux's terminology differs, you might think you are low on ram when you're not.

How do I see how much free ram I really have?

To see how much ram your applications could use without swapping, run free -m and look at the "available" column:

For a more detailed and technical description of what Linux counts as "available", see the commit that added the field.

When should I start to worry?

A healthy Linux system with more than enough memory will, after running for a while, show the following expected and harmless behavior:

Warning signs of a genuine low memory situation that you may want to look into:

How can I verify these things?

See this page for more details and how you can experiment with disk cache to show the effects described here. Few things make you appreciate disk caching more than measuring an order-of-magnitude speedup on your own hardware!

LinuxAteMyRam.com was presented by VidarHolen.net. This site is available on GitHub for comments and PRs.